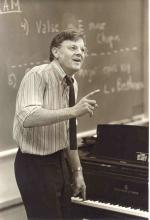 Irving Forbes (1922–2008) had a profound impact on many generations of New Englanders through his teaching, music making, and advocacy. His seemingly boundless energy, unique style and sense of humor made him an unforgettable figure within the communities he devoted himself to.

His long teaching career began in the 1950s, working in the public schools of rural Colebrook, N.H., and later moving to the Seacoast area and teaching jobs in Kittery, Maine, and Portsmouth, N.H. Irving became a student again, earning a Master of Music degree from Boston University in 1955. At about the same time he also served as principal bassoonist for the Portland Symphony Orchestra for several seasons, and as president of the New Hampshire Music Educators Association for 1954–1955.

From 1959 to 1987, Irving taught at Phillips Exeter Academy in Exeter, N.H. From 1962 to 1974, he also directed and conducted the Rockingham Choral Society, a large community chorus that frequently performs choral masterworks with orchestra.

Even in retirement, Irving’s interests and energies were still strong. He found time to conduct the choir of the Ellsworth (Maine) Unitarian Universalist Church for 15 years, served on the board of directors of Bagaduce Music Lending Library, was a guest conductor of Bagaduce Chorale in spring 1990, and founded and conducted the Peters Cove Men’s Chorus. And as if that weren’t enough, Irving traveled weekly to Swan’s Island School in 1991 and 1992 to volunteer as a music teacher.

Please help us mark Irving’s centennial year by contributing to a fund in his honor. The fund will provide support to New England choral organizations in perpetuity through annual grants given by the board of Choral Arts New England.

Some of my earliest musical memories are of visiting my mother in the music building at Phillips Exeter, where she worked as Irving’s secretary in the early 1980s. There was a tuba that sat on the window sill in the music office and eight-year-old me would like nothing more than to puff up my little lungs and give it a toot. Instead of being annoyed, Irving was always encouraging and full of smiles.  [Greg Brown, PEA ‘93; board chair, Choral Arts New England]

Irving was my advisor as a one year senior day student. I was very involved in theatre and a member of the PEADQUACS, and often drove home late at night. One night I woke up and found myself driving on the other side of the road. I told Irving and he insisted that I come live in the spare bedroom in his lovely Tudor home behind the Exeter Inn. I spent the second semester living with Irving and his family. They made me feel welcome and gave me the opportunity to truly be a part of the boarding experience of PEA and to safely continue my passion for the arts. I will always be grateful for his concern and generosity of spirit. [Angelynne Hinson, PEA ‘80; board member, Choral Arts New England]

Irving Forbes is linked to Choral Arts New England through his work on the board of the Bagaduce Lending Library. CANE has given grants to the Library on nine occasions, starting in 1985, and proudly supports their ongoing work. As Choral Arts New England celebrates its 40th year, we are happy to reconnect with the family of our first Lifetime Achievement Award recipient, Irving’s cousin Elliot Forbes.

We Welcome Your Donation

We Welcome your Pledge

Your pledge may be fulfilled at once or via payments through 2022.

Donors are recognized at several levels. Please contact us for more information.

Join the Campaign: Be A Voice For Voices

Make a significant donation that can make a major impact on the future of choral music. Give a one time or recurring donation here or make a pledge below.

We welcome your pledge of support. Your pledge may be fulfilled at once or via payments through 2022. Donors are recognized at several levels. Please contact us for more information.

More About Our Campaign