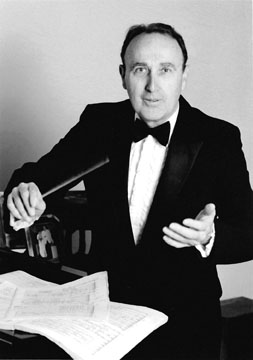 Dr. Gerald R. Mack, 2014 recipient of the Alfred Nash Patterson Lifetime Achievement Award, is a nationally-known conductor, educator, and mentor. He was conductor of the Worcester Chorus in Massachusetts for 28 years (1977–2005), founder and leader for 15 years (1995–2000) of the Great Waters Music Festival in Wolfeboro, NH, and Director of Choral Activities and a faculty member for 27 years at the Hartt School of Music at the University of Hartford, Connecticut. After retiring to Nantucket in 1999, he became the Executive Director of the Nantucket Community Music Center; he later established theNantucket Art Council's highly successful winter concert series. The Worcester Chorus established a scholarship in his name in 2010.

Dr. Mack has worked with Gunther Schuller, Yehudi Menuin, Michael Lancaster, Seiji Ozawa, and Aaron Copland, among others. His choruses have performed at Carnegie Hall, Tully Hall, St. Patrick’s Cathedral, Jordan Hall, and Washington’s National Cathedral, as well as at many of the great concert halls of Europe. He has conducted at the New York Mostly Mozart Festival, the Salzburg Music Festival, the International Dubrovnik Music Festival, and the Oaxaca Spring Festival (with the Mexican National Symphony).

A dedicated educator with a deep commitment to colleagues and students, Dr. Mack has a national reputation as an adjudicator, lecturer, clinician and guest conductor. His high school choirs appeared at numerous MENC conventions (of the National Association for Music Education). In 1961, his school chorus was invited to represent the U.S. at the International Music Educators’ Convention in Vienna. His Hartt choral groups were frequently selected to appear at American Choral Directors Association (ACDA) conventions throughout the U.S., and he conducted many All State and Divisional Festival Choruses. While at Hartt, he organized and hosted the first ACDA Eastern Division Convention.

One product of his involvement with the Connecticut Commission on the Arts was the Greater Hartford Youth Chorale, which Dr. Mack and his wife organized for the first annual Hartford Arts Festival. That initiative became an ongoing program which continued for 10 years, providing special musical opportunities for suburban and inner-city young people from 22 high schools in the Hartford area.

Dr. Mack has degrees in Music Education and choral conducting from the University of New York at Fredonia (bachelors) and from Columbia University (masters and doctorate).