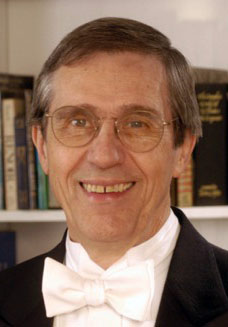 E. Wayne Abercrombie, 2013 recipient of the Alfred Nash Patterson Lifetime Achievement Award, is a noted conductor, clinician and workshop facilitator with extensive experience working with singers and students at all levels.Professor Emeritus of Music and former Director of Choral Activities at the University of Massachusetts Amherst, Dr. Abercrombie retired in May 2007 after 33 years in the Department of Music. He succeeded Alan Harler as Director of the Madrigal Singers in 1974, founded the University Chamber Choir in 1978, and became Director of the University Chorale in 2000.

Choirs under Dr. Abercrombie’s direction have toured the Eastern Seaboard and in Europe. His appearances as guest conductor include festival choruses and orchestras throughout New England, Georgia, Indiana, Iowa, Missouri and Pennsylvania, as well as the Five College Orchestra, the Springfield Symphony Orchestra, and both of its youth orchestras. His third appearance as conductor of the Massachusetts All-State Chorus was in 2007. He has lectured, conducted clinics, taught in and served as consultant to colleges, high schools and churches, and at conferences of the American Guild of Organists, the Music Educators National Conference, and the American Choral Directors Association (ACDA). He served on the Executive Boards of the Conductors Guild and the Massachusetts Music Educators Association.

He has served on the state, division and national boards of the ACDA, as President of the Massachusetts chapter, and as President of the Eastern Division from 2004 to 2006. In 2007 he was named Massachusetts ACDA Conductor of the Year. He is chair of the Steering Committee for the Conducting Master Class at the ACDA Eastern Division 2014 Conference with Simon Carrington.

Dr. Abercrombie is a co-founder (in 2007) and current Artistic Director of the Children's Chorus of Springfield(Mass.), and helped to establish the International Federation of Choral Music's program Conductors Without Borders. Since retirement, he has been guest conductor or lecturer at Amherst College, Boston University, Northeastern University, University of Massachusetts Amherst, Worcester Polytechnic Institute (where he was made an Honorary Member of the Men’s Glee Club), and Western New England University. He continues to research new approaches in teaching conducting and in discovering how conductors learn their craft, and was an observer at the Eric Ericson Masterclass 2011 in Haarlem, The Netherlands.

Dr. Abercrombie holds degrees from Westminster Choir College, (B.M. in Voice and M.M. in Conducting), and Indiana University (D. Mus. in Choral Conducting with Highest Honors). He has been Assistant Conductor and Chorus Director of the Johnstown (Pa.), Elkhart (Ind.) and Springfield (Mass.) Symphony Orchestra Choruses. He taught and conducted at West Georgia College and Indiana University at South Bend, has taught voice and sung recitals and solos with orchestra, and was a member of the Atlanta Symphony Orchestra Chamber Chorus under Robert Shaw.