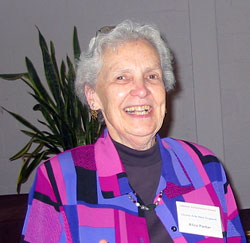 Alice Parker is the recipient of the 2004 Choral Arts New England Lifetime Achievement Award. The award was presented at a 2:00pm ceremony on Sunday, November 14 at Grace Episcopal Church in Amherst, Massachusetts.

Each year, Choral Arts honors a musician for exceptional service to choral music and to the choral community in New England. Ms. Parker, who has received four honorary doctorates, and was named Distinguished Composer of the Year by the American Guild of Organists in 2000, was cited for her enduring commitment to choral music as composer, conductor, teacher and arranger.

Ms. Parker began her conducting career as a teenager and has led community choruses, church choirs, amateurs and professionals. At the urging of her singers and her peers, she founded Melodious Accord, in the belief "that melody is an unparalleled means of communication… that when we use our ears and voices we enrich our lives… and that singing together brings immediate benefits – physical, mental, and spiritual – to those who join in this most participatory of all the arts."

For six decades, Alice Parker has explored melody and rhythm as a means of communication in religious rituals, in the recounting of oral history, in festive celebrations, in imparting cultural values, and in shared pleasure. Focusing on the voice as the ideal instrument for expression in all these contexts, Ms. Parker enjoyed a long collaboration with Robert Shaw. This association resulted in many settings of American folk songs, hymns, and spirituals. Along with her commissioned works, which are many, these settings comprise an enduring repertoire for choruses the world around.

Born in Hadley, MA in 1925, Ms. Parker continues to live on the family farm. There she hosts student and adult workshops, including workshops for young composers, which she conducts at least twice each year.