I was thinking that of all these groups that have been honored today with awards, so many of them have touched me in my life. Starting with Bud Patterson, in front of whose chorus I sat as a horn player, in the years when I was playing professionally. I remember very strongly performances in Sanders Theatre of The Seasons, and other pieces as well as well. The legacy of Bud Patterson is a very important one, and one that is a real model for all of us.

I think of George Kent, with Westerly. One of the very first jobs I had as a free-lancer was playing the String Symphony of Benjamin Britten with George Kent. I remember looking at him, thinking, how can he conduct with his left hand? I don’t understand that. [laughter] This was a piece I had never heard, have not heard live since, and it’s a piece that, as we’re about to embark on a Benjamin Britten season with the Cantata Singers this coming year, I had really yearned to do. We ended up choosing not to do it, but I yearned to do it, and that was in large measure because of my experience having played it with George and Westerly.

I think of Adam Grossman, music director of Master Singers, who for numbers of years sang with Cantata Singers; Andy Clark, whom we’re just getting to know a little bit, but who is going to bless us this year with a pre-concert lecture for one of our concerts with the Cantata Singers, Lou Spratlan, who’s been commissioned to do this piece for Da Camera, a composer who I know many, many years ago and whose music I was fortunate enough to conduct. I think of John Ehrlich and Spectrum Singers. He’s mentioned that we’ve had the pleasure and challenge and joy of collaborations over a number of occasions; those have been extremely important to me. And I think, most profoundly, of Emmanuel Music and Craig.

Emmanuel for so many years was an extraordinarily important part of my life, both as a horn player and as a conductor. And Craig was an extraordinary presence in my life. I really owed  to him the first conducting that I did in Boston. Craig was such a wise musician. He and I became fast friends when I played in the orchestra at Emmanuel. I remember him saying - I’d done a little conducting on some of the orchestral concerts and chamber music concerts. He said, “I think you should conduct a Bach Cantata.” I said, “well, I don’t know any Bach Cantatas;” I’d played a couple, but I didn’t really know any. And he picked out a Cantata, Cantata 42, that would be the first Cantata I’d every conduct. He was so wise; it was exactly the right Cantata for this person who really didn’t know choral music, who didn’t come from that background at all. I still remember working on that piece, and I owe all of that to Craig,

So, for me to be the next recipient, after Craig, means a lot.

I was thinking of all these groups, and people in these groups, who have touched my life, and I was thinking this is an extraordinary community, of singers, and conductors and organizations that are really intimately connected. Even if there weren’t Choral Arts New England, they still would be connected. I was sitting there thinking, I wonder what “Orchestral Arts New England” would look like? [long laughter] It’s kind of inconceivable. It doesn’t make sense. I mean, we wish it would make sense, but it really doesn’t make sense. And I think it’s because of this sense of community that the singers in these groups, the conductors in these groups, all feel about what it is they’re doing. That the group that’s doing Zelenka, or the group that’s doing Lou Spratlan—there’s a level of fascination that cuts across those boundaries and from chorus to chorus. Someone’s talking passionately about a composer who was maybe a girl and maybe a boy, and everyone is absolutely, deeply interested in the ways in which that music might speak to them.

I think that this is a unique gift that we have, this choral singing thing. And I say that, not ever having sung in my life, except in the church choir when I was a kid. And not having been trained as a choral conductor. But having realized that it truly has changed my life. It’s changed the way I think about music, it’s changed the way I approach music, it’s informed all of my music-making, I think, and I hope in good ways—I KNOW in good ways, in very, very good ways.

I think that, as John—or maybe it was Andy—was saying, the level of commitment that singers have, to singing in congregation, is a very, very powerful one.  And it’s something that is not like orchestras. You know, the Arlington Philharmonic, or the Newton Symphony, those are wonderful organizations, and there’s nothing to take away from them at all. They’re very important to our community. But the sense of community within the communities and the sense of community across the boundaries of those organizations is not something that orchestras share the way choruses do.

So, the gift that we have is that people truly love singing, and they love singing with each other. I think it’s also our challenge, because embedded in that is a concern that I have that says sometimes I think people love singing in choruses more that people love hearing choruses sing. And that’s nothing to do with the quality of the groups—all of the choruses in this room I think experience that to some degree.

Joan Watson was saying that she was driving up here from New Haven listening to choral music on the radio, and I was thinking, was she really? [laughter] Was it a CD put into her car? Because it’s very difficult to find choral music on the radio now. And I think there’s a very good reason for that. I don’t necessarily mean a healthy reason, but there is an identifiable reason for that. And that is that choral music cannot be turned off when it’s in your presence. You can’t just sit there and let it wash over you. You don’t want to do that with any music; but if you turn on the classical music station, the repertoire avoids difficult twentieth century music, and it avoids a lot of solo singing, and it really avoids choral music—except for WHRB, where they’re just doing... whatever.

And it’s because, I think, a bunch of people standing up together and singing words, important words, challenging words, heretical words, passionate words, religious words, whatever, singing them in unison, not necessarily in musical unison but in unison, together, is a very challenging thing, a challenging thing for the audience. It’s not like going to an orchestra—I mean, orchestral music is deeply important to me, but you can go to an orchestra concert, and it’s so colorful, and it’s so pretty and exciting, that you can just kind of go, “oh, it’s so beautiful!” and not really think about what’s going on. But choral music doesn’t allow you to do that.

I think the level of discomfort that people often have—not singing together, but hearing a bunch of people singing together—is something that we, as the governors of these very important organizations, really have to contend with in some way. I’m not sure what the answer is, but I think each group tries in a different way to address this challenge.

We don’t try to address that challenge simply because our budget will be a little bit better if there are more people in the seats. But really because we really believe in what we do. We believe in the power of this music. The power of this music to not just wash over us like a salve, or like a warm bath, but really to change our lives. It changes OUR lives - we wouldn’t be here if it hadn’t changed our lives. And it has that power when we find a way or various ways to help people take it in and to listen seriously. I was reading what Benjamin Britten said about music: Don’t just sit down and let it go by you! Listen intelligently, listen carefully, listen thoughtfully. And choral music, of all the art forms, requires that of the audience. And when the audience gets hooked into the seriousness of what we’re doing—the music itself may not be serious, it might be playful!—but it’s still very serious, because its intent really is to rearrange us somehow, rearrange us just a little bit.

We’re all willing to have our lives rearranged. But audiences aren’t always. I remember, I was music director of the Tallahassee Symphony for a long time (or, a number of years) and I used to talk about the power of music to change peoples’ lives, because I really believe in it. At about my tenth year I was talking to the Board of Directors, saying this again. One of the Board members, who at that time was the President of the Board, after I said something about “music has the power to change peoples’ lives”, she looked at me frustratedly and said,  “some people don’t want their lives changed!” And I thought, well, I guess maybe this is my next-to-the-last year!

Everybody in this room wants his or her life changed, because we have invited this music into our hearts and into our souls, and we then send it out through our vocal chords, or through the piano or the violin, or whatever—the organ. And we do it not to entertain. There is an entertainment quotient in this—there is a part of it that is entertaining. That is the thing that hooks us—it is entertaining. But, you know you go to an orchestra concert and there’s all kinds of things to look at. People are hitting things and they’re scraping on things and they’re doing all kinds of visually different and kind of exciting things. But the chorus shows up and they all kind of look alike—there’s the tall one and the short one, and the dark one and the light one, and the male and the female, but they all kind of look alike, they’re all pretty much doing the same thing, and there’s not that much to watch. You’ve got to listen. You’ve really got to listen.

So, it seems to me that this organization is truly dedicated not just to supporting the efforts of all these wonderful organizations, but also to supporting the path to finding ways to let this music go out and communicate, and change peoples’ lives. And when that part of the whole picture is there, then we have completed a very important circle that reaches from Schubert, or Zelenka, or Bach, or Britten, or Spratlan, through us, to the heart of all of those people,. unsuspecting listeners, who go away, at the end of the day, rearranged in an incredibly wonderful way.

So, I’m very grateful to you for this honor. It means an enormous amount to me. Thank you very much. 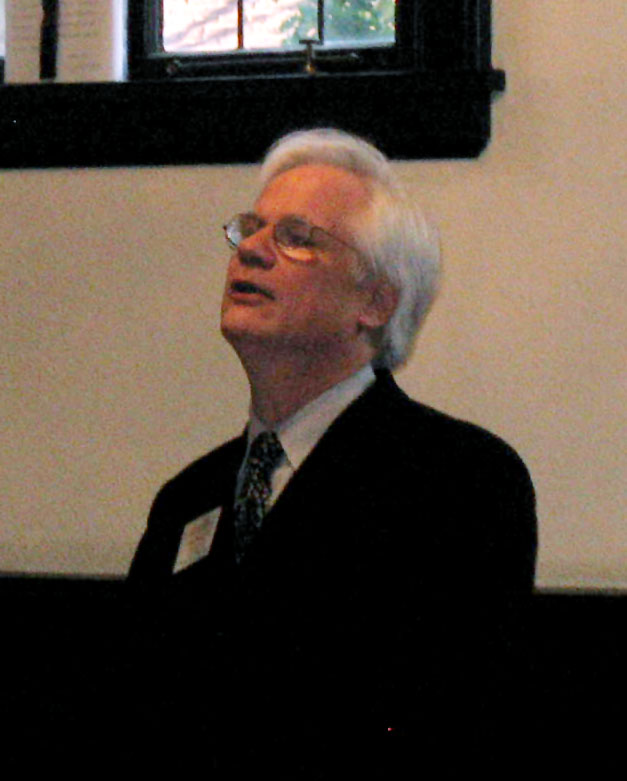