Choral Arts New England has created a new series of informal online chats designed to be a place for choral professionals and enthusiasts to gather and discuss their challenges and triumphs during this forced hiatus from in-person collective music making. Growing out of those is a free webinar on Sunday, June 14, at 7 pm, featuring three musicians that are successfully creating music over the internet.

The session will feature short presentations from each of the panelists on their projects, methodology, technology, and philosophy, followed by discussion and an open Q&A. While free and open to the choral community, the webinar will be limited to 100 attendees and registration via Zoom is required. We are planning to create a recording of this session which will be made available afterwards.

Register in advance for this webinar: https://us02web.zoom.us/webinar/register/WN_KuCoTDjTQTSmyL9oRSAwLw

After registering, you will receive a confirmation email containing information about joining the webinar.

Host and moderator Gregory W. Brown studied composition and conducting at Amherst College, Westminster Choir College, and the University of Georgia’s Hugh Hodgson School of Music. His teachers included Lewis Spratlan (composition) and Joseph Flummerfelt (conducting). Brown’s works have been performed across the United States and Europe — most notably in Weill Hall at Carnegie Hall in New York City, Cadogan Hall in London, and the Kleine Zaal of the Concertgebouw in Amsterdam. His latest major work — un/bodying/s — was commissioned and recorded by The Crossing, and released on Innova Records in early 2018. Greg has served as Grants Committee chair, and is currently board-chair elect for Choral Arts New England. He has created a vocal track for one virtual choir, and it was much harder than he thought it would be.

Zachary J. Moore is an American composer, arranger and educator. In 2015 he graduated from the University of Wisconsin - Eau Claire with his Bachelors degree in Music Education and currently teaches at Waukesha West High School. Zach’s compositions have received many unique and prestigious performances in five of the seven continents around the world. In March of 2020, when the COVID-19 virus shut down the state of Wisconsin, Zach became determined to keep music alive in Wisconsin by spearheading his first ever virtual choir. This performance involved 1,403 students from 35 different schools around the state of Wisconsin. As a result of this undertaking, he has been inquired upon to create virtual choirs for high schools, a statewide news broadcast and an honors choir. Links:

Liz Bologna is a professional singer in Greater Hartford. Currently, Liz sings with Voce, Voices of Concinnity, and the Schola Cantorum at the Cathedral of St. Joseph in Hartford. She has had the great fortune to work with several notable composers, including Ola Gjeilo, Eriks Esenvalds, Paul Mealor, and Eric Whitacre. Liz is featured on the recently-released album Blessing: the music of Paul Mealor, recorded by Voce and available from Signum Records. She can also be heard on the Boston Choral Ensemble’s album Still, Still Night (2014) and records as a member of Vox Futura, the studio choir at Futura Productions in Boston. Liz has served as the Executive Director for the Women Composers Festival of Hartford since the summer of 2017. She continues to be an advocate for music and the arts in Greater Hartford. In addition, Liz is part of two ongoing virtual choir projects for new compositions by Thomas LaVoy and Cheryl B. Engelhardt. Links:

Zachary Beeksma is the Director of Choirs and Chair of Art and Music at Nathan Hale High School in West Allis, Wisconsin, where he teaches 3 curricular choirs, 1 extra-curricular choir, Musical Theater, and Sound Engineering. He has been on the leadership team for over 15 theater productions in West Allis in various roles, including music director, assistant director, sound designer, set design, and keyboard. He holds a Bachelor of Music Education from Northern Michigan University, a Master of Music from Westminster Choir college and he is currently pursuing a Specialist Degree in Educational Leadership from Arkansas State University. He has performed in numerous choirs and theater productions and is a regular member of the professional recording ensemble, "The Same Stream Choir", based out of Philadelphia. Links: 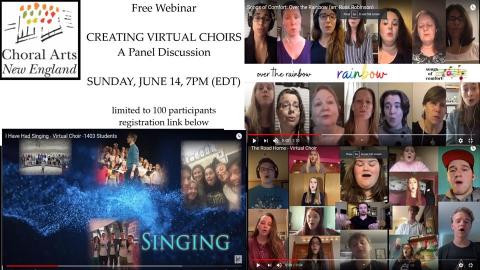